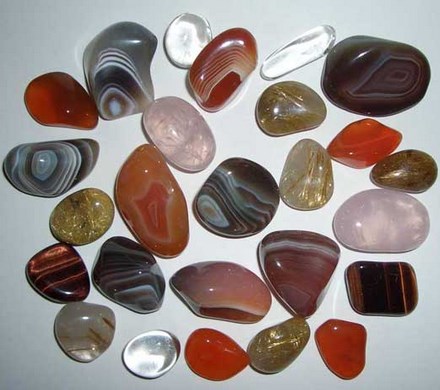 To cut a long story short chalcedony stone is a fine fiber translucent version of quartz.  It has different kinds of coloration.  The gem’s name descends from the ancient city of Chalcedon.  By the way, chalcedony crystal is often associated with all cryptocrystalline silica minerals, including onyx, agate, carnelian and sarder.

The mineral is volcanic by nature.  Its deposits often come with calcite, amethyst and zeolite.  The richest deposits are situated in Brazil, India, Uruguay, Madagascar and Scotland.  Huge chalcedony deposits have been recently discovered in the Crimea, Eastern Siberia and Caucasus.  The oldest mining center of chalcedony is in Germany.  The gem’s deposits can also be found in the USA, Poland, Sri Lanka and Czech Republic.

Chalcedony was mined in ancient Greece.  The first chalcedony mines were located on the shores of the Marmara Sea, in the city of Chalcedon.  Pioneers were amazed by the whole variety of the gem’s colors.  Jewelers of that time used bright chalcedony samples for making jewelry products (gems and cameos) and finishes of religious items.

After the collapse of the Roman Empire chalcedony lost its former popularity and interest to the gem arose again in the 17th century.  In the era of classicism collections of minerals were in every European royal family.

Jewelry with chalcedony wore well-know people of that time: Napoleon, Byron and Pushkin.

For jewelers chalcedony is a stone which has the following colors: milky, blue, yellow-gray and opalescent.  It also has a dim luster on its chips.  The gemstone is opaque except very thin plates.  The color of the stone can be changed by heat treatment.  Once it’s heated it becomes red, yellow or orange.

Chalcedony is one of the most popular gemstones ever used in jewelry industry.  It ideally fits jewelry products for men and women.  A variety of colors and patterns makes it a perfect material for the manufacture of cuff links, rings, seal-rings, pendants and necklaces.  The gemstone lends itself well to stone-cutting machining.  The most common cut is cabochon.

By the way, there’re low cost versions of chalcedony.  They’re used for the manufacture of various interior items such as statuettes, vases, ashtrays, dishes and boxes.  Some chalcedony samples are used to revet furniture and walls.  That’s a good material for table tops and frames.

It boasts curved stripes and inconspicuous color such as brown, gray, yellow, blue or green. It’s used for the manufacture of cameos, beads and rings.

That’s a bright and homogeneous gemstone.  Moss agate features dendritic inclusions, quite similar to moss.  Decorative streaks of dark green color shine through this translucent gemstone.  In the form of polished wafers it’s often employed for the manufacture of pendants, brooches and necklaces.

The given stone can be milky-white, colorless or gray with clearly seen veins of dendrites.  Another intricate feature of the gemstone is a unique variety of whimsical drawings.  Despite the similarity that’s not fossilized algae or moss.  These are oxides of manganese and iron.  Woody agate is used for the manufacture of interior items.

It’s an orange-red stone with a cloudy color distribution.  That’s a common basis for engraving.  The stone is capable of changing its shade under the influence of heat.

It’s a slightly translucent bright green gemstone.  Chrysoprase tends to lose its color saturation when exposed to sunlight.  You should place it in a wet area to restore its color.  That’s the most valuable version of chalcedony often inserted into golden or silver frames.

Ancient healers of Paracelsus, Avicenna, etc., appreciated unique chalcedony healing properties.  They believed that the gemstone could efficiently whiten teeth, strengthen gums and cure dysentery and fever. It was also used as remedy against snake and insect bites and poisons.

Blue chalcedony positively affects the nervous system, stimulates memory and brings calmness and good sleep.  Besides this the mineral has a good impact on the cardiovascular system and helps to reduce high blood pressure.

Chalcedony is a good material for charms and amulets, which ward off evil spirits and bad dreams.  Jewelry and any other items made of this gemstone were extremely popular with travelers and sailors.  Healers associated chalcedony with feminine.  It was believed to attract happiness, love and stability in family relations.  Eastern people were convinced that the gem could eliminate sadness and loneliness.

Traditionally, chalcedony is a gemstone of love.  It’s capable of attracting attention of men to women. It harmonizes intimate relationships and enhances sexual energy.  To become wealthy you should wear this gemstone in a silver seal-ring.  The mineral can protect your home from bad weather and negative influence of geopathic zones.

Women wearing bracelets made of chalcedony create a positive and loveful atmosphere in their homes.  They also avert natural disasters, betrayals and quarrels.  Chalcedony sharpens logical thinking, calms anger and pride.  Avoid wearing jewelry with this stone all the time as the gemstone absorbs energy.  The brighter its color, the more powerful it is in terms of magic.

A well-known version of chalcedony, agate gives people confidence, eloquence and courage.  Jewelry with agate will protect kids from falls and injuries.  The stone will help adults to restore after failures in their love affairs.  Furthermore, jewelry with this stone will always be a great gift.  Such products ensure mutual understanding and goodwill.

Chalcedony and signs of Zodiac

What would astrologers advise to us? The gemstone’s major owners are Aquarius and Virgo.  The color of the stone is very important.  Taurus and Libra should wear white, pink and blue chalcedony samples.  Green and yellow samples will suite Virgo, while Scorpio should wear black chalcedony.  Capricorn requires dark colors.  Sagittarius gets energy and strength from this stone.

By the way, moonstone is the second name of chalcedony.  As follows from the name, it protects people born on the full Moon.