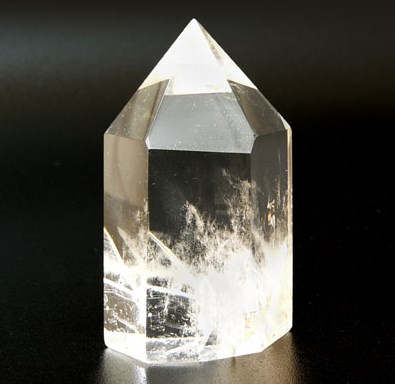 One of the most common minerals on our planet rock-crystal – is a variety of quartz. Usually it is colorless, but impurities in its composition may impart gem a particular shade.

This stone began to be produced one of the first. People liked unusual natural rock. The history of the mineral in civilization has more than six millennia. At all times people appreciated it, put on a high place in the hierarchy of wealth. This state of affairs hasn’t changed and now.

We have inherited many beautiful crystal objects, most of which are cult. Rock-crystal is rarely used for making jewelry, dishes and utensils in the modern world. But it has become indispensable in the industrial sector.

The name “Crystal” in Greek means “ice”. Also, the mineral can be called the Arab and “Bohemian diamond”.

Due to the fact that this stone is found in nature very often, and also thanks to its unparalleled beauty, the mineral was popular since ancient times. It is surrounded by many beautiful legends, interesting myths and beliefs.

Gods, as magical stories tell us, drank exclusively from crystal goblets. Roman Emperor Nero was also very fond of drinking from these cups. He had two.

Eminent philosophers of ancient times have argued that the mountain gem was icy stone forever. Diodorus Siculus adhered to a slightly different version. He said that this mineral emerged from the crystal clear water that according to the will of the gods and under the influence of the sacred flame became the ice.

Perhaps the magic powers and influenced somehow the formation of stone, but today’s researchers have a more mundane perspective. It was found that the mineral formed from hot aqueous solutions by crystallization when the temperature fell.

In ancient times stone was known to the peoples of the Mediterranean and Asia Minor. Maya and Aztecs carved skulls from a piece of the rock, intended for ritual ceremonies.

With the help of Crystal lenses Olympic flame was kindled in Ancient Greece.

Romans usually made ​​vase of mineral. Clothes and harness were decorated with the rock-crystal.

The Greeks used the stone to cool drinks and body. Its unique property to accumulate physical cold and give peace of heat is incomparable with any other material.

Despite its mountain spirit, mineral is very sensual. It serves the good of mankind and has many healing properties.

Ancient Chinese craftsmen used stone in their own way: they made of it glasses – optical feature of the stone caused far mysticism, magnifiers of this breed is extremely high quality.

History shows that the crystal served as material for luxury tableware and other expensive items. However, glass melting rapidly displacing it, so now the mineral is commonly used in the technical purposes.

But every self-respecting prophet uses only real crystal ball, because the magical powers do not accept anything artificial. So in the manufacture of religious objects crystal mineral remained popular.

Typically, the crystal has no color. It’s just a transparent, very similar to a frozen block of ice. But there are varieties that greatly expand the color gamut of this mineral.

Rauchtopaz or smoky quartz – is a transparent smoky rock, that has a brown tint of varying intensity. Previously, it was used to decorate liturgical objects, clothes and horse harness. It is believed that it has very strong healing properties, the magic power.

Yellow rock-crystal – is citrine. This kind is rare, so it is very much appreciated in the jewelry business.

Amethyst, another described species, is credited with unusual properties: it is believed that this purple gem helps get rid of alcoholism. In addition, women use mineral for the love spell beloved. It is believed that a person, who gave amethyst to beloved one, would be mutually loved.

Dark brown, black variety of quartz is called morion. Particular importance is its brilliance and depth of black. If morion is very brilliant, having a deep black color, it is more valuable. In certain circles it is considered a gem stone, delineating the boundaries between the worlds of the living and the world of the dead.

One of the varieties of quartz, despite a very funny name – rutile quartz – is the most valuable among others. It got its name due to the thin, like the hairs inclusions. This mineral has a wonderful golden color. Also, it is credited with magical features: protection of love and loyalty, protection of human health.

Rock-crystal by itself has a lot of magical and healing powers.

No wonder the ancient emperors drank only from crystal goblets. Previously they believed that the crystal was able to purify water, if it is translated into a modern twist – to disinfect. In this regard, mineral is attributed the ability to protect the body from diseases.

Tibetan physicians have successfully used this stone for the treatment of deep wounds, cuts and abrasions. Through the mineral the sun’s rays refracted and impacted positively on the wound.

Such treatment is scientifically based. Perhaps before this value was not important, but now this ability is highly valued. The fact that the ultraviolet rays, passing through the mineral, kill bacteria better and qualitatively and it speeds recovery.

Magicians and other representatives of the unknown used crystal balls since ancient times to conduct their magical rites: they have seen (and maybe even see!) the future, the past and the present in them.

Magical properties of quartz help to find the gift of foresight. In alchemy that mineral was considered to be a shell of the planet, through which people kept in touch with the cosmos.

In addition, rock-crystal gem, framed in silver, will save its owner from hypothermia in severe frost and overheating – in the heat.

There are other magical abilities of the crystal that are worth noting: it activates brain activity, helps people to understand better a situation, to bring good luck and love, fills life with harmony and joy. If there is a product of this breed in the house, the family will live in prosperity.

Those who want to protect themselves and their family from harm, it is necessary to put a spherical or conical crystal product in the house. Crystal accumulates positive energy, which resists successfully the forces of evil.

Everyone learns to use special telepathic properties of the stone in his own way, according to his own abilities and predispositions. Someone starts to affect people, inspire them their ideas and personal opinions. Others call loved ones who live far away and come rarely. And others just setting themselves up for the best, why their life and becomes brighter.

The natural beauty rock-crystal, as a symbol of purity and openness, their properties can be compared to the character of Aries. Perhaps because of this, most Aries’s prefer this mineral to others. People born under this sign are characterized by directness, sincerity and simplicity. Mineral does not weaken such dignity of the individual but rather strengthens twice.

Fire zodiac signs are very hot-tempered by themselves. They can offend easily a person and forget about it immediately. This property is certainly their demerit. But rock-crystal gem comes to the rescue in such cases. Being cold, gem will calm violent nervous system of Fire signs, it will make them more accommodating in communication, but stubborn in achieving the aims.

As mineral is transparent, rock-crystal is symbolized with ice and moisture. Therefore, its element is water. Water signs can buy mineral to find the always missing harmony in life and develop their love relationship.

The rock-crystal mascot does not harm other zodiac signs. On the contrary, all its abilities will help people, regardless of when they were born.

Great level of hardness allows referring rock-crystal to the category gemstones. It is resistant to the adverse effects of chemical and physical factors.

Rock-crystals are used to measure a pond depth – under the influence of high pressure crystal is deformed.

This superb stone found its application in almost all spheres of human life, from jewelry to complex technical devices. And how many useful things are not discovered in this stone is to learn in the future.