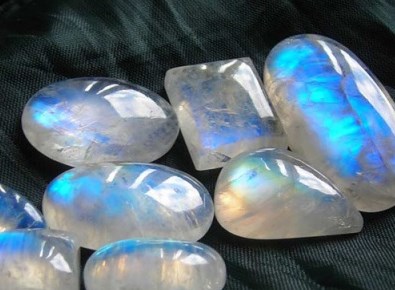 Moonstone refers to iridescent (rainbow iridescent) feldspar. Traditionally, it is a white or transparent crystal with very nice silver-bluish tint and slight golden shimmer inside. Its homeland is considered Sri Lanka and India.  Moonstone although is found in some other countries. In Europe this mineral is also called – adularia, in Russia – belomorite, and in China – “fish-eye”.

According to Hindu mythology, moonstone is made of hardened moonlight. Many cultures also identified its pearly shine with the moon rays and it’s easy to see why when you look at adularia, it resembles the full moon shining through the veil of thin, high clouds. By the way, it is believed that adularia luster becomes stronger with the growth of the moon and reaches its peak at the full moon. The beautiful crystal looks the least attractive least it in the waning moon.

The greatest reverence moonstone used in India. The ministers of Buddhist temples still believe that if you put it in a dark place, it will provide a drop of “lunar dew”, which has healing properties.

In the Indian traditions there is information that this mineral is received as a gift from the gods of the Moon, Lakshmi and Vishnu that floated across the sky. Shiva, Brahma and Vishnu used moonstone with other gems to create twelve-armed goddess Devi.

Alexander the Great wore a ring with moonstone.

In Arab countries women embroidered underwear with moonstone crystals, because it was considered a symbol of fertility. Mineral enjoyed popularity in jewelry because it set off perfectly oriental women’s dark skin.

Great designers of romantic Art Nouveau era, such as Rene Lalique and Louis Comfort Tiffany, showed the world that the gem could be used in jewelry. Moonstone was also a favorite among craftsmen of the second half of the nineteenth century. It was framed in silver. In 1960 representatives of the Hippie movement wore moonstone to add the look of mystery and ephemerality. But the designers of the 90s style New Age appealed to the natural beauty of that mineral for the search of inspiration.

In addition to traditional translucent, moonstone is found in delicate shades of peach. It can be blue, gray, white and even black.

In South India, it was recently discovered deposit of moonstone with greenish-golden tone.

Traditionally play of blue shades is peculiar to moonstone. If flicker is shown in other colors, in addition to the blue, the crystal is called “rainbow moonstone”. These gems are more valuable, but they are rarer. Stones with the effect of “cat’s eye” and “star-shaped” ones also belong to rare moonstone species.

The most beautiful and high-quality moonstones are mined in Sri Lanka and India. But, unfortunately, many of the deposits have almost been exhausted in these countries. Therefore, moonstone price increases every year.

Of course, this provokes that the market appears a lot of fakes. Moonstone undoubtedly ranks first in the number of synthetic gems that under the guise of natural are thrown on the market.

How to recognize a synthetic moonstone? The first thing you should be alerted is unusually bright iridescence. Yes, as a rule, artificial stones look much more luxurious than the original. But most importantly, that real moonstone never shines blue when it viewed from the right angle. This is due to the fact that it has a layered structure, so micro scales that comprise strictly reflect light at an angle of 12-15 degrees. In synthetic ones sheen will be always the same and uniform, no matter how you turned decoration.

Moonstone has always been associated with the gods. Especially, that is not surprising, with the moon deities. Therefore, it was considered a talisman of clairvoyance. To gain the ability to see the future, it was necessary to keep the crystal in the mouth during a full moon. There was a method and easier – to put gem under the pillow to dream prophetic dreams that night.

Since the mineral refers to the moon, then it attributed magical properties matching this luminary: tenderness, love, romance and fertility. In the Middle Ages this mineral was lovers’ talisman and guarantee tenderness of their feelings.

Some of the moonstone magical properties also include fulfillment of desires.

Traditionally, it is a stone for “new beginning”. It is also a symbol of inner growth and strength. Moonstone relieves emotional instability and stress, stabilizes emotions and gives peace of mind. To tell the truth wearing moonstone is not recommended for people who tend to go on about their emotions and desires. It will only increase the capricious nature.

Adularia advised to wear for people of creative professions, as part of its magical properties is the ability to give inspiration.

Besides gem is credited the property to protect a person while traveling.

Moonstone helps the digestive system, improves absorption of nutrients and removes toxins and excess fluid from the body. It also encourages the regeneration of body cells and helps to restore the liver and pancreas. Also the stone is considered traditionally female mascot, which has positive effect on all features associated with childbirth. Moonstone helps men to reveal their emotional essence.

In old books on medicine moonstone is recommended to wear to prevent epilepsy and seizures.

Moonstone gem is perfect for people born under the sign of Cancer, Virgo and Libra.

However, representatives of fire element – Sagittarius, Leo and Aries are not recommended to wear it.