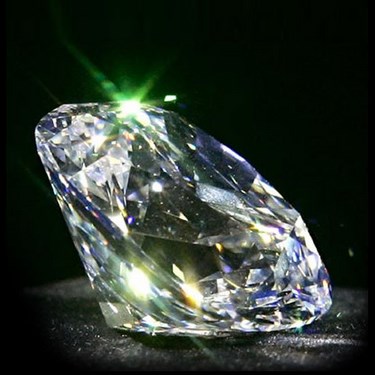 The name “diamond” is French by origin. In the jewelry industry faceted and polished diamond received the name.

All properties of this gemstone are truly unique. Mineral is valued for its hardness, transparency, the ability to shine and radiate all the colors of the rainbow.

In addition, this precious mineral is a sign of power and strength. It “loves” its owner very much and favors him in all endeavors.

All diamond abilities we mention in this article. And especially we describe in detail its magical and healing capabilities.

The history of this gem is shrouded in lots of secrets, mysteries and intrigues. There is a common belief that the first diamond was found in India for more than six thousand years ago.

And then, and later, until the XV century diamond valued almost less than other stones. This is due to the fact that rough diamond by itself is not attractive. The beauty it gets after careful cut.

First people learned to polish diamond facets in ancient India. The most important center of diamond cutting to this day is Amsterdam. Properly cut diamond is able to distribute the light rays so that a small wonderful rainbow is formed from all its sides.

Now there are several types of cut. The best of them is the French. Due to such processing stone can shine like the sun.

Fashion for wearing diamonds came to us also from France. First court lady, noticed in the processed diamond beautiful aesthetics and started to decorate her appearance such gems became mistress of King Charles VII named Agnes Sorel. It happened over 500 years ago.

But earlier diamond was popular, especially in ancient times. It was considered Julius Caesar’s talisman. Subsequently Napoleon liked this mineral very much.

In Russia the stone was used in jewelry since 1500. Catherine the Great became trendsetter on jewelry with this gem.

In 1905, in one of the colonies of Britain, namely in the Transvaal, the biggest diamond in the history of mankind was found. This nugget had unique properties: it was completely clear and did not include foreign impurities. Subsequently, it broke into pieces and bounded. One of the largest diamonds, get out of this diamond, adorns now the British crown.

Whatever the diamond is: black, yellow, blue, white, it is always great. This mineral looks great on any person, regardless of the type of appearance and sex.

Particularly diamond is appreciated having no color. The phrase “a diamond of pure water” is a kind of quality mark. This expression means that the mineral, dropped into a glass of water, becomes invisible and merges with the purity water.

Classifying stone in color, there are several groups, starting with colorless with a gradual increase color saturation to yellow, gray and brown hues.

There is one interesting species – black diamond. This jewel is of natural origin and has a beauty and attractiveness.

Most of the white and colored diamonds are transparent and have a glossy surface. Black Stone is matt and almost completely absorbs light rays. Despite this, the black stones are excellent diamond shine.

Beautiful black diamond has unique characteristics. Its price may at times exceed the cost of conventional mineral shades. But stones with gray inclusions or partially transparent cost less.

Diamonds are credited with the strongest magical and healing properties, which by their power are incomparable to anything else. Even the mere possession of the stone gives its owner the power of the unknown.

Since olden times the mineral was used as a sign of bravery and courage.

Knights decorated it their armor to win the competition. Diamond gives the owner more courage.

As a sign of divine power, this mineral is able to protect the house from evil spirits and other evil that may have quite human roots. Jewel protects against treachery and betrayal, helps gain confidence in yourself.

Diamonds have and other healing characteristic: in ancient times people believed that because of this pebble you can get rid of epilepsy, all sorts of nervous and mental disorders.

But all this is in the past, and how do people interpret the value of the diamond in modernity?

Today’s doctors and even some scientists have identified the properties of jewels, distinguished by its strong beneficial effects on human health. The owner of a diamond will never suffer vascular diseases.

Frequent poisoning, disorders of the gastrointestinal tract of different genesis is a sign to buy diamond jewelry. It definitely will help reduce the incidence of such diseases. This stone can heal from any kind of addiction. Those who have already started to inpatient or outpatient treatment of addictions, mineral is suitable as a means of support, so necessary in this difficult time.

The stone is significant for women. It helps them to cope with a lot of “female” diseases and problems. It literally stops time, preventing aging and beauty fading.

But the main advantage of the mineral is the ability to give a child to desperate couple. This is the most important characteristic for those women who are indifferent to all external diamond splendors and its high cost, but the main thing is the family hearth and cheerful children’s laughter at home.

A stone that has a black color has its own characteristics. Decorating with such a diamond protects its owner from damage and increases his alertness. It helps, but not right away. Stone begins to show its impact in a few months and even years. And it especially helps to those who received it by inheritance.

Thus, regardless of the color of the mineral, whether black, white, any other, it affects beneficially. Diamond itself never brings misfortune to people. It becomes merely a pretext for scandals, quarrels and even wars, but it all depended on people’s will.

Any stone characteristic, whether magical or medical helps people improve their life quality. Surely, this is one more condition, due to which a diamond is so valued in the modern world.

In terms of astrology, diamond is considered mineral of Venus and the Sun. Due to the presence of such powerful patrons this breed has a strong energy.

Despite the fact that the representatives of all the zodiac signs dream to wear jewelry with diamond, it is not effective for everyone.

It is especially recommend to those who are born under fire sign: Aries, Leo and Sagittarius. Diamond provides these people patronage and protection.

Some astrologers do not advise to buy diamond jewelry people whose zodiac sign is Pisces. They believe that to wear such a strong mineral needs a strong internal energy, which Pisces doesn’t possess from birth.

According to these parameters Capricorn corresponds to the gem having full strength and activity. Mineral will favor its owner in every way and will help to achieve success in the desired area.

In the description of magical acts of the mineral we should particularly note black diamond which helps mainly Taurus, Libra and Leo. A diamond of this color has a powerful energy, so its effect is most pronounced. Virgo, Scorpio, Pisces and Aries are better not to buy such a mineral; it is much less effective for them.

But neither black nor common mineral likes dishonest and dishonorable people. So diamond brings only disappointment to these owners.

Comment on “Diamond – a Symbol of Luxury and Power”