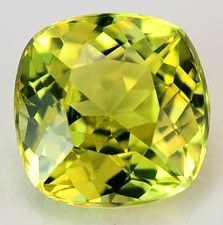 The Greek word “chrysoberyl” means “golden”.  This amazingly beautiful and quite rare gemstone became known more than 4 thousand years ago. By the way, alexandrite admired by many people is just a widespread and popular version of chrysoberyl.

Its origin and deposits

Nowadays there’re several versions of how chrysoberyl was discovered.  One of them states that a Finnish mineralogist firstly discovered this mineral approximately in the period of 1792 – 1866.  According to another story this marvelous gemstone was found in 1833 on the emerald mines situated on the banks of the river Tokovaya, near the city of Yekaterinburg. 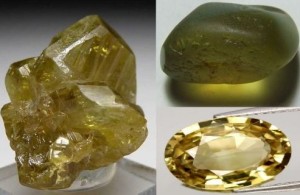 The gemstone was highly praised by the nobility of that time and that especially applied to court ladies who were fascinated by its extraordinary beauty.  Nevertheless, in the Russian Empire despite all its beauty and irresistibility chrysoberyl was considered to be a symbol of loneliness and sadness.

On the contrary, Europeans were likely to believe that chrysoberyl was a symbol of amorousness and jealousy.  In India and Sri Lanka this gemstone was associated with longevity and prosperity.  In short a different nations valued this stone in their own unique way.

Its hardness according to Mohs is 8,5.

As for transparency, natural chrysoberyl samples can be translucent and transparent.

The form of the formation of chrysoberyl crystals resemble double or triple elbow nuts.

One of the key features of chrysoberyl is its unique ability to form mica schists as well as granite inclusions.  The same is true for the druse voids.  Very often deposits of the “golden stone” are found in pegmatite veins or entities of pneumatolytic origin with fluorite, beryl, apatite and other minerals.

Huge chrysoberyl deposits are situated in Ceylon, Madagascar and Minas Gerais (Brazil). Meanwhile, wonderful chrysoberyl samples are also mined in the Urals (emerald mines) and in the USA (near Golden in Colorado).

That’s one of the few minerals, which was artificially synthesized by scientists.

The area of application

Such a rare gemstone enjoys extraordinary popularity and quite intensively used in the jewelry industry.  Bleached and clean chrysoberyl samples are extremely popular and in terms of beauty they go on a par with white sapphire, diamond and zircon.  Jewelry with this gemstone are charming and beautiful.

Healers of the ancient Rus used chrysoberyl for curative purposes.  For instance, they used it to alleviate the suffering of alcohol intoxication. Representatives of alternative medicine emphasize the role of chrysoberyl in treating skin diseases, especially scabies and leprosy. 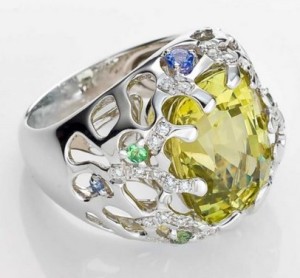 Modern representatives of oriental medicine think that wearing jewelry with chrysoberyl will help people prone to increased excitability.  Cleaning up the blood and blood vessels is its another good use.  Some lithotherapists are assured that this gemstone can have rather a positive impact on the human heart.  Apart from that , it’s used in the treatment of concussions of varying complexity.

Chrysoberyl takes responsibility for all the organs, subject to the heart chakra.

Chrysoberyl has been being popular with magicians throughout the world for centuries.  For instance, in ancient India it was believed that the magic spells and charms imposed by means of chrysoberyl would help to learn the language of animals.  Europeans thought that the gemstone could help men to attract women. Being charmed by chrysoberyl women won’t miss an opportunity to get acquainted with the owner of the mascot.

Up-to-date magicians think that chrysoberyl with a golden cut will make its owner successful in all regards, especially if it’s inserted into a ring.  Additionally, the mineral is capable of developing the wearer’s intuition and insight, if he or she already has these qualities.  It will also avert wrong decisions.  The owner’s soul will acquire harmony and peace forever.

Many people would like to believe in a higher power support, so there’s no wonder they put a lot of value on various talismans.  They simply hope to get a reliable protection this way.  Literally, any item can serve as a mascot for its owner, on the condition the wearer realizes its importance and believes in its supernatural properties.  Chrysoberyl isn’t an exception in this regard.  Many people believed that the magical properties of chrysoberyl makes it an ideal mascot for anyone engaged in the field of commerce or social activity.

It’s not difficult to become the owner of a chrysoberyl mascot.  For this purpose you require purchasing a golden or platinum ring with this stone in its facet.

This mascot will provide its wearer with the required assistance in love affairs.  It will also protect him or her from misfortunes, envy people, detractors as well as other negative influences