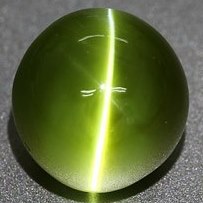 Cat’s eye is called processed stone, the center of which is a narrow strip of concentrated light. If you fumble the stone, this strip will be shifted. This effect gets its name for the similarity of the band with a cat’s pupil. In nature, there are several minerals which the processing can look like this. But traditionally a “cat’s eye” without shaping stone is considered to be a type of chrysoberyl.

In addition chrysoberyl, cat’s-eye effect can be minerals such as: tourmaline, quartz, aquamarine, moonstone, apatite and scapolite. Chrysoberyl has the highest hardness of all these gems and it is the most pronounced effect.

But if to speak about chrysoberyl, it is mostly found in such hues as gray, yellow, green and dark brown. They all have golden sheen.

In the treasury of the British Empire kept the cat’s eye weighing more than three hundred carats. This gem belonged to the last king of Kandy Sri Lankan state. Gemstone was presented to Queen Victoria in 1886. 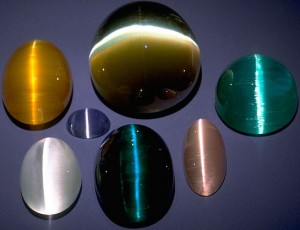 Besides color, the stones differ in transparency and intensity of a cat’s eye effect. The brighter effect and transparent crystal, the higher the cost it has.

Stones with cat’s eye effect have long been used as protective amulets by different tribes and peoples. Cat’s eye was especially revered in Hindu mystical and astrological trends. So far, their members are not extinguished disputes about what finger, what hand, what day of the week and at what the moon would be correct to wear the stone as a talisman. Different schools have different opinions.

Cat’s eye gem acquired popularity among jewelers only at the end of the nineteenth century. It happened after the British Prince Arthur, Duke of Connaught and Straharnsky after engagement presented his bride Princess Louise Margaret of Prussia ring with cat’s eye.

This caused a real hysteria among the nobility, and chrysoberyl, which previously almost ignored, became madly fashionable. In this regard, they began development as known at the time fields and new searches. In the early twentieth century, the price of good quality cabochon of this mineral could reach 8,000 dollars.

This chrysoberyl cat’s eye with good gloss is an expensive stone. It will cost exactly the same as a diamond of the same size. It is not surprising that when buying this gem, you may encounter a fake. 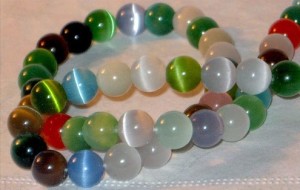 Fortunately, it is rather simple to distinguish natural stone from glass imitation. Chrysoberyl is very hard mineral – 8.5 on the Mohs scale. That means that scratch it (unlike glass) can only with a ruby, sapphire or diamond. Cat’s eye by itself may leave scratches on the glass. But if precious gems are not at hand you may determine the natural stone another way: put it into darkness. In the absence of light natural chrysoberyl will illuminate as an eye of a real cat. And the shine of the mineral will increase if wiped with a cloth, while a fake does not change.

The largest chrysoberyl weighing eight kilograms recorded in 1828. It is in the treasury of Rio de Janeiro city.

It is also worth noting that fake stone looks much brighter and more beautiful than natural.

Cat’s eye stone is credited very strong protective magical properties. In some cultures, it was believed that the stone could even save a person from death.

For example, there are reports that many Russian aristocrats, who managed to escape to France at the beginning of the 1917 revolution, wore jewelry with cat’s eye. And precisely because of this stone, they felt the threat to them and managed to avoid it.

Mineral does not only protect its owner, but also dispels negative energy, cleans the aura and brings confidence, happiness, tranquility and good luck. A man wearing cat’s eye never faces the pangs of jealousy.

The magical properties of this mineral help customize thoughts in a positive way and develop tolerance and harmony of nature. Also because of its golden color, cat’s eye is often associated with wealth. Chrysoberyl is closely linked with discipline and self-control. They say it promotes concentration and helps the owner in pursuit of excellence. In addition, it gives peace of mind, clarity of thought and increased confidence.

Also presented cat’s eye is able to cause a feeling of strong sympathy and deep position to the giver. This gem is a stone of reconciliation.

It is believed that chrysoberyl can treat diseases, for example, diseases of the cardiovascular system. It makes blood vessels stronger and promotes healing of chronic and even incurable diseases.

How to Keep and Wear Stone

As cat’s eye is very hard mineral, it is quite difficult to hurt it. However, this does not mean that the stone should be treated carelessly. It must be kept from rapid changes in temperature and acids. It’s better to wash the stone in lukewarm soapy water. Always after washing wipe it with a dry soft cloth to enhance shine. 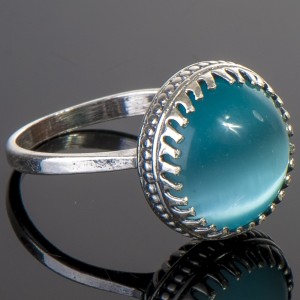 It should be kept separate from other jewelries with stones, so as not to damage them.

As a magic mascot cat’s eye is best worn in a ring. Rim for it can serve such metals as steel, gold and platinum. It is very important that the stone is in contact with your skin.

The choice of mineral color depends on a man’s profession. Ministers of the church, scholars and teachers are best to choose their mascot crystal of yellow hue. People in authority or representing it (managers, administrators or militaries) is more suitable golden brown cat’s eye. But those who work with money – golden-green. Dark green crystal will become a good talisman for people of collar occupations and employees.

Cat’s eye is best suited to those whose zodiac sign is Aries. Also it can be worn by Taurus, Capricorn, Leo, Scorpio and Aquarius.