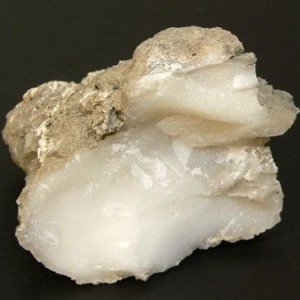 Stunning in its beauty cacholong meaning has several names: pearl agate, Kalmuk agate, sacred cow milk. There is a version that the name comes from the Kalmuk words .

In fact cacholong – is not a separate type of gems, but just one of the varieties of opal. It is just absolutely opaque, but no less beautiful.

Milk stone consists of mixture of fine-grained chalcedony and ordinary opal. It includes a lot of calcium, so the mineral can be transformed into chalk. In this regard, it is contraindicated contact with water. But special breed items that moisture is not terrible are selected to create jewelries.

Milk color and matte shine glorified cacholong as a mineral of gentle, pure beauty. People composed legends about it, the gem was attributed all sorts of useful features. This breed has a long history.

Ever since the days of ancient India a legend remained that the stone appeared from the udder of the sacred cows that lived in Buddhist temples. Initially, it was milk, but falling to the ground, turned into a gem of great beauty.

In Egypt cacholong gem was associated with sacred bull Apis. According to legend he was born of the moon beam and became a symbol of fertility, health and prosperity.

In Rome people made ​​of that stone stunningly beautiful things: statuettes, tableware, boxes and jewelries. And the Mongols very appreciated it for whom that gem was a sign of purity and innocence. They compared the beauty of this stone with lotus petals – flower revered in their culture.

And despite the fact that Europeans became aware of the existence of this breed only in the 18th century, the stone gained popularity quickly. Luxuries began to be produced from it and arranged chic interiors. At present the main fields were discovered in Russia, Iceland, Armenia, Central Asia and Kazakhstan.

This gem is in great demand in our days. Because they still make ​​of it souvenirs and decorate interiors. It is the most popular mineral in the jewelry industry. 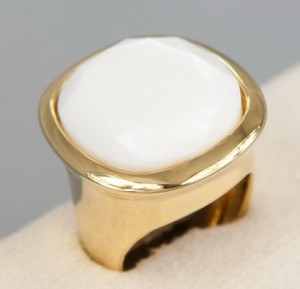 Glass matte shine of stone along with pure white color – this is its distinguishing mark, and the main advantage over others. This shine is achieved thanks to the presence of micropores in the structure of the gem, causing light scattering. White shade is due to intensive porous structure.

It is believed that this stone is white, but it may appear blue, gray and green veins and cracks that are just decorate it. Colouring of the mineral can be greenish, bluish shades with different natural patterns on the surface. However, snow-white color is still considered traditional.

This mineral is a sign of motherhood. Surely, it was named milk stone for the snow-white color. In the culture of every nation, which for several centuries knows about this gem, it is associated with women’s health.

Its curative properties are extensive: mineral helps heal virtually all female illnesses. During pregnancy the milk mineral is simply indispensable: it facilitates toxicosis in the first months, protects subsequently from premature birth. In addition gem and facilitates the process of birth.

Shattered nerves? It is a sign: buy “Kalmuk agate” and forget about it. Mineral has beneficial effect on the nervous system and allows you to relax as much as possible.

Unknown magical powers allow cacholong healing and diseases of the gastrointestinal tract, as well as clean fully the body.

Some people believe the magical features of stone so strong that they can give power to those who heard by the fate of others: lawyers, politicians, doctors and teachers. This mineral will not allow its owner to commit indiscretions.

There is a belief that cacholong stone brings home harmony and peace. A family having this gem will surely live in peace and harmony. People wearing a decoration of this stone, are not characterized of scandals and sort things out by swearing and squabbles.

Whatever magical properties attributed to the stone, horoscope looks at it differently. If someone really likes mineral, it is not the fact that it will bring only happiness and prosperity.

This stone is associated with Venus, the Moon and Taurus. It improves the well-being and promotes healing. It is more suited Taurus and other signs of Venus. Mineral is very supportive of Libra. It is not recommended to Scorpio and Aries, as well as other fire signs of the Zodiac. All others may acquire the gem without fear, because it serves only for people’s benefit.

If your sign is Pisces, mineral can bestow upon you the sorcerer gift. Therefore, dear Pisces, before choosing jewelry or souvenir from cacholong, consider this: won’t be this gift a burden for you?

The quiet beauty and noble color of cacholong stone allowed occupying a strong position in the jewelry industry. There were created millions of masterpieces, jewelries of unearthly beauty and impressive souvenirs. Art does not stand still, and every day beautiful creations of the “river stone” are growing to our delight.