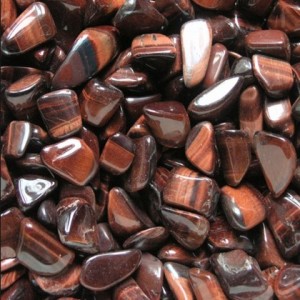 Bull’s eye belongs by its species to ocellar quartz. This type of quartz is formed by the inclusion of tubular voids or parallel oriented needles of other minerals. Due to the shine formation on the surface of the treated stone, it becomes like a wild animal eyes. Hence minerals of this group get their names.

Any stone belonging to the ocellar quartz group has pronounced protective properties. It is valued as an amulet in many nations of the world.

Stone is attributed to mass properties, including healing and magic. It affects people with its power and strong energy. Even now, in the era of scientific and technological progress, there are those who believe strongly in power of the mineral to heal and protect its owner in every way.

At its core a bull’s eye is a tiger’s eye. The difference is in the shade which it acquires under the influence of certain temperature.

The name of the gem was due to the fact that the mineral color was similar to the bloodshot bull’s eye. Despite such aggressive name, this mineral is worshiped and believed in its beneficial effects.

People know about the existence of the stone long ago. Anciently it was attributed magical powers of varying strength and level of action.

In Rome people believed that if to engrave certain characters on the stone, it would save a warrior in mortal combat. Bull’s eye attached to the soldiers bravery and courage, even when it was almost impossible.

In India, there were also many superstitions associated with the stone. It was attributed magical opportunities to absorb solar energy and then give it to the man. Also there was an opinion in this country that the mineral became harder if its owner is in danger.

This stone is often used to make jewelry. Less often it is used to create beautiful souvenirs and interior decoration.

Bull’s eye mineral is not uniform in color. It incorporates hematite inclusions. Thanks to this, mineral surface can be observed an interesting overflow and play of light.

Stone exposed to natural or artificial heat-treated gets red or brown hue. By its color mineral looks like, as already mentioned, to the eye of an angry bull. The color of this breed can vary from red to terracotta. There are often brown stones. There are minerals with a touch of purple and maroon stones. Previously people believed that some magical powers affected the color of the stone. Now, however, it was found that the mineral acquires its color due to the concentration of certain trace elements in it.

This gem doesn’t have species. It is the kind of ocellar quartz derived from tiger eye stone, which has a slightly different color and the same composition.

It is believed that the powerful magical beings bestowed mineral different abilities. Now this gem is able not only to protect its master, but also to cure him from a variety of ailments.

People with psoriasis, having unstable blood pressure and symptoms of gynecological diseases, can consider a bull’s eye just happy discovery. This mineral helps get rid of the above ailments.

It is known that the stone helps women recover from infertility. And it is very effective against all sorts of dependencies.

Those who want to expand or strengthen their extrasensory capabilities should wear constantly the gem. Magicians and sorcerers claim that it is an intermediate step between the present and the past. Therefore, there are allegations that the mineral owners have seen their previous life.

Described stone is a mineral of action and activity. It is not suitable for recreation. It is better if the person will not wear it all the time, otherwise he would not be able to relax and experience the fun of the holiday.

Strong magical properties of the stone allow using it as a home mascot that protects the family from every evil form. As a home guardian people hold it in the most prominent place not to squander its effectiveness in vain. Positive energy of mineral applies to all family members and even pets.

As far as bull’s eye is considered suitable for active and industrious people, so it does not favor lazy ones. Mineral affects depressingly on the passive fast livers. It can cause internal conflict, due to man’s reluctance to do anything and because of stone power that inspires to actions. This conflict often leads to stress.

If the stone is dark, it is a sure sign of the coming deterioration in business. This property is the reason for the mineral is called financiers and businessmen’s stone.

If this gem adorning the ring worn on forefinger of your right hand, it can bring success in business. Mineral, adorning your left hand, will improve the financial position of the owner and his family.

These magical abilities were discovered centuries ago. And until now, the mystical nature of these forces is not yet fully disclosed. Therefore, the appearance at your mineral properties are not described here, should not surprise you. Just such a possibility has not been previously observed or disclosed.

Its magical function the mineral is capable to perform for all zodiac signs. There are none of those to whom it is contraindicated. Permission to wear this gem “issues” only the nature of a man and not the elements and constellations.

Though the stone favors particularly to one sign of the zodiac. This is Scorpio. Ambitious and motivated people born under the sign of Scorpio, simply must have at their disposal at least one decoration with bull’s eye. It will give them even more energy to achieve the goals and will strongly contribute to their success.

Having unprecedented power, brown mineral for several millennia is faithful service to people whose main purpose is self-actualization. Like the eye of unknown deities, bull’s eye is watching those who deserve more and helps them achieve this.