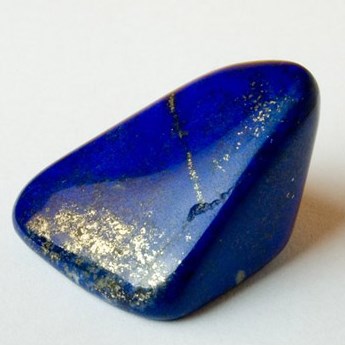 Lapis lazuli – is decorative and ornamental stone. It is a beautiful mineral which is also called the “stone of heaven”. It is especially beautiful in sunlight. The chemical composition of lapis lazuli is a sulfur-containing substance with alumosilicate Ca and Na.

Its deposits are found in Afghanistan (Badakhshan), Russia (southern Trans-Baikal), Chile and United States (California). And the name is derived from the Arab word “azula”, which means blue and sky. Another name of Lapis Lazuli – is Lazurite.

The most valuable species is lapis lazuli with bright blue or purple shades and silky glow. In nature, there are instances of bright blue, blue-purple with white, greenish-blue and blue with a touch of indigo.

For the first time lapis stone began to be mentioned in description of Badakhshan mines in Afghanistan. And the age of the deposit is equal to 7000 years. This place was the main supplier of lapis lazuli to the royal courts of the Europe and China.

In Egypt, the lapis lazuli mineral valued on a par with gold, the tombs of the pharaohs were decorated with the stone. The value of lapis gem was great and it was widely used in jewelry and painting. Artists used the ultramarine color that achieved through the application of paint from crushed minerals.

This paint possesses the property of stability when exposed to sunlight. It was used by well-known artists of the Renaissance. At this time, the superior community of Europe wore lapis lazuli jewelries of large sizes and various objects: table tops, panels, vases were decorated with the gem at noble’s homes.

In Russia Lazurite began to be mined since 1851. A variety of structures was decorated with it. This is columns and rooms of St. Isaac’s Cathedral, the Medici vase in the Winter Palace.

In folk medicine lapis lazuli is a great tool that helps restore a person’s vision. A person who wants to thus improve his vision should every day for a while contemplate the mineral.

Lowering of high blood pressure, calming effect on the nervous system, getting rid of nightmares – there are mains healing properties of lapis lazuli. Also lapis healing property is worn by pregnant women on their stomach. This prevents future mothers from abortion, eases toxicosis.

Healers believe that the stone helps people who are sick sciatica, asthma, allergies. This mineral is also used to treat internal ulcers, overvoltage of nervous system, diseases of the vertebral system, lumbar, hair loss. Besides all this, it has a strong anti-inflammatory, protecting against burns, analgesic effect.

In Egypt it is considered a stone of the Gods, which helps to communicate with the Gods. Ancient peoples of India believed that lapis lazuli helped to strengthen body, mind and consciousness. Crushed stone powder was used as an additive in drug poisoning. It was considered that it output poison from the body.

In European countries it was considered a mineral of sincere feelings, a symbol of good luck, success and prosperity. Gifts with decorations of lapis lazuli were perceived as manifestation of friendship.

Today, it is believed that the lapis stone saves its owner from negative energy: old offenses, wrong actions and thoughts. Metaphysical properties of the mineral help its owner to develop spiritually.

Lapis stone wearer gets quality which allows him to feel another’s pain and resentment. When interacting with a stone one becomes wiser. Also mineral reduces anxiety, unpleasant memories are forgotten with it. It is recommended to use the stone in meditation in order to get rid of bad memories and thoughts.

The stone is used as an amulet of sincere relations and true friendship. It contributes to the goals, friendship strengthens with its help. The mineral is used in yoga as cleanser of all negative effects of the stone. Talisman of this gem helps its owner attract success and love.

Stone in astrology can be worn by Libra, Aries, Aquarius and Pisces. Astrologers do not recommend wearing of this stone by other zodiac signs without definite cause.