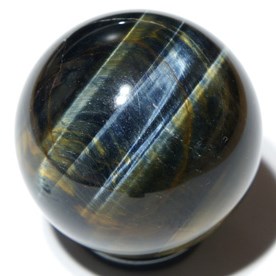 There are countless legends in history that explain the origin of one or another mineral. At all times, semi-precious stones were attributed magical properties. Someone believed that the stones are fallen stars and someone in that it marks the Lords of the universe presence on earth in the distant past. Unlimited color combinations, plays and visuals encourage people to create a poetic hypothesis of birth minerals. For example, pearls were seemed icicles of frozen dew that fell at sunset, moonstone – is frozen in time sea foam ejected mighty waters of the shore.

Many natural phenomena are expressed in the names of minerals. Any stone name emphasizes its essence, ocellar quartzes are the bright example of that. Looking at them, you will notice that it is amazing gems, as they look very similar to the real eyes of predatory animals and birds.

Hawkeye gem arouses particular interest among the species of ocellar quartz. It has a very murky color from dark gray to light green. There are gems of dark red or fiery red color that are difficult to distinguish from the amber. The center of the mineral is penetrated by needles from blue-green to a rusty-red color. The stone is extracted in the United States, Mexico, India, Australia and South America.

Hawkeye is used in the manufacture of various jewelries:

This amazing stone has no relation to the real predatory animals, but, looking at it, it seems that there are predator’s lively eyes in front of you, watching the victim. With such a stone, you feel care and protection of small eye that hides magical properties.

In different cultures you can meet a variety of beliefs about the magic power of hawkeye. For example, in India, it is valuable as diamonds and emeralds, and symbolizes the god Brahma. Hindus claim that hawkeye stone has a strong energy and works wonders. Mineral, due to its magical properties, can act as a talisman, as is capable of causing an exacerbation of intuition, to protect from the evil designs of enemies. For example, if the stone is inserted into a ring, its ability is expressed in a slight change in size, it grows heavy and begins to put pressure on the finger and it helps to understand that there is a danger to the owner. Magical properties of mineral are able to attract to its owner total luck and a great fortune.

There is a belief that if a person with evil intentions or thoughts touches the stone, then it will fall the strongest energy impact on him, which will prompt him to leave the owner’s house. If you put the mineral next to the photo loved one, you can be sure that it will create a protective aura around that person.

Hawkeye – is a stone of success, it favors true leaders with an active lifestyle. Its magical properties may be different, so hawkeye “adapts” to the needs of each person. For example, an unmarried young girl wearing an amulet as a pendant, it will be easier to find the betrothed, and it will aide in keeping order in the house for a married woman.

Amulet will help elderly man gain respect in the wise men’s eyes. For men this amulet is a powerful protector against the corrupting influence of evil forces and it is a good luck magnet. Stone creates around its owner an aura of trust, acceptance and attraction of success.

It is not recommended to wear this amulet infirm people, because in this case it loses its magical properties.

Hawkeye treats perfectly inflammations, improves the immune system and improves the function of internal organs. If after a hard working day you stop your sight on the stone, then after a while you can feel relieved and feel its healing properties. It is also shown people exposed to nervous breakdowns, stresses and depressions. It is believed that hawkeye helps heal physical injuries, including fractures and is able to heal wounds.

It is used for relaxation and meditation, improves vision and relieves pain in joints. If you wear the mineral according to your zodiac sign, it maximally activates its magical properties.

This stone “loves” such signs of the zodiac as Scorpio, Capricorn and Aquarius. Hawkeye provides these signs invaluable assistance in managing their emotions and feelings. Representatives of all the other signs of the zodiac can also wear this gem without fear of negative consequences.

For example, it will help Aries being protected against energy vampires. Mineral gives cancer protection from accidents and the evil eye, it will help to overcome financial difficulties. It will be guard for Sagittarius against attacks, assassinations and protect against gossip.