Peridot or chrysolite is a jewelry semi-precious stone of great beauty. Today it is used in jewelry making in combination with gold and gems. In ancient times it was not only an amulet or talisman, but also a part of the internal design of a number of European cathedrals buildings.

Peridot or chrysolite translated from Greek means “golden stone”. It is included in a group of semi-precious stones. Peridot is a gem. This mineral has been known since ancient times, mostly used as a piece of jewelry. It was often used for royalty clothes decoration in ancient times.

First deposit of peridot was discovered on the island Zabargad that is close to the Red Sea. This mineral was also called “Evening Emerald” because just at nightfall saturated green tones of the stone were well marked by candlelight.

Historians believe that peridot crystal was known to mankind for four millennia ago. Proof of this are the references to the Roman scholar writer Pliny in his writings on this stone. This stone is also mentioned in the Bible, it is part of the gems that adorn the Russian imperial crown.

During the Crusades in Europe, the soldiers presented chrysolite their wives as gifts. The stone gained great popularity in the 19th century. The main reason for this was that they believed that the stone had the property to improve virility and help to get rid of impotence. 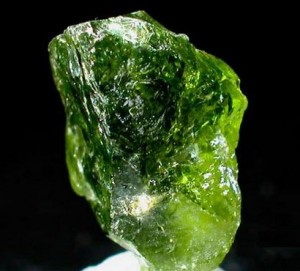 Peridot in fact is one of the varieties of chrysotile mineral. It is also called forsterite, kashmir peridot, chrysolite, olivine. The spectrum of colors of this mineral is very diverse: it is light green, emerald green, olive green, dark chartreuse with golden overflow, brownish-green.

In addition, there are the following types of peridot in mineralogy:

It is believed that the richer green color of the stone, the higher its value. There is light green genuine peridot in nature, which is not very appreciated in jewelry.

Originally chrysolite is silicate (acid salts) of iron and magnesium. It is a member of the family “Quartz” and is part of the volcanic rocks. The first field of this beautiful mineral is found in Egypt, on the island Zabargad. The island’s name matches the name of the stone, zabargad is peridot in Arabic. At present stocks of the stone are found in countries such as: Germany, Norway, Burma, Egypt and Hawaii.

Faceted peridot, as well as other precious stones, has the magic. It is often used as a guardian mascot. Since ancient times, magicians and sorcerers believed in magic of the stone and attributed to him many useful properties for the human aura.

For example, peridot stone is perceived as destroying the evil spell and protecting from the evil eye, damage, and other negative energies. And it concerns not only the man himself, but his environment (home, objects). People, who wear this stone, become much more patient, gain personal and family success. 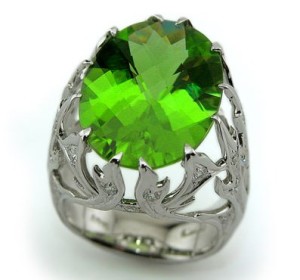 Wearing this pebble promotes strength of mind and will, develop an intuitive sense of the person. Many people believe that peridot protects them from fire and theft, loss of property, helps to win in litigation. The mineral helps to conquer other people’s sympathy, make the right decisions in difficult situations.

Under lithotherapists’ assumptions, traditional healers, chrysolite has the ability to treat diseases associated with vertebral system.

Also a man, who wears jewelry from it, can easier to endure cold, it improves eye health, and asthmatics endure asthma attacks easier and quicker. Healers believe that the constant wearing peridot optimizes the heart and blood pressure. If you contemplate this stone for some time, it improves vision. The Vietnamese people believe that peridote is useful in diseases of the liver, as well as its use in the treatment of children’s stuttering.

Since ancient times, mankind uses chrysotile as talismans or amulets. This stone represents intelligence, courage, multifaceted development, the desire to transfer knowledge to others. This stone is more suitable for people with inventive and innovative qualities. It is also used as an amulet that protects from evil energy. For example, it is hung over the front door, to avoid thefts, assaults thief.

It is known that every person should wear his stone, that is stone is associated with the sign of his birth. Peridot is the stone of the sun in astrology. Peridot is traditionally august birthstone. It is else suitable for the zodiac sign – Pisces. Female Pisces, who wears earrings with peridot, always save a fortune in family relations. A man (the same sign) wearing peridot will be successful in advancing the career ladder. Mutual love and respect will keep wearing rings with this stone, for both men and women. It is believed in astrology, that such a sign of the zodiac as Leo should also wear jewelry of peridot; this also applies to Virgo.

Astrologers say that every stone has its greatest strength in a certain period of time. According to the M. Reinsky’s stone calendar, beryl is much more effective in the month of October. Depending on what astrological phase is the planet and zodiac sign is determined by the influence of the stone to human life and health.

Modern astrology says that the stone will be a good mascot for the signs – Leo and Virgo; it is a lucky stone for the zodiac sign Libra. Those people who were born in the 3, 12, 21, 30-th of any month may also wear chrysolite.